The Iruña-Veleia deposit is located in the municipality of Iruña de Oca / Iruña Oka, about 10 km west of Vitoria-Gasteiz, occupying the Arkiz spur, delimited to the North, South and West by a large meander of the Zadorra river. . Of its 126 hectares, 11 belong to the walled area.

The known occupation at the Iruña site covers more than 1500 years of history, from the first millennium B.C. until the 5th century AD It seems that in this century the late oppidum would be abandoned, a new settlement not being documented until its use as Priory of the Order of Saint John in the middle of the fourteenth century.
After a poorly defined occupation in the late bronze and Iron Age, it is during the first half of the 1st century AD. (Julio-Caludia era), when the first Roman domus or urban dwellings appear.

Late in the 1st century, in Flavia, the city reaches greater splendor, building luxurious homes and large public buildings that had to form an urban center according to the importance that had acquired the city of Iruña.

In the second century important works of beautification and improvement of urban facilities are also carried out, being cited Veleia in the ancient sources by Pliny and Ptolemy.

During the 3rd century, it reduced its urban area although no doubt this period is the worst known. At the end of that century or early next the walls were built that would be the last great public work made in the city.

The flowering of Iruña-Veleiea as a city was surely due to the fact that the Alavés territory was crossed by a main communication route: a road, commonly known as iter XXXIV and linking the then important cities of Astorga and Bordeaux, this fact we know thanks to the descriptions of some ancient itineraries, such as the call of Antonino. Apparently this road once crossed by the Ebro River was headed to the mansio of Beleia, the first located in the present territory of Alava, a station that the investigations coincide in identifying with the so-called "Oppidum de Iruña".

Some of the materials from the excavation of the site are located on the third floor of the Bibat Museum Archaeology section.

All other materials from Exceptional (of which this website deals) are held by Diputación (accusatory party) at the Bibat Museum, under its «custody»

Lorena López De Lacalle, former Deputy of Culture, at an appearance on November 16, 2010 in the Basque Parliament, before a question from Aralar about where the pieces were, recognizes the accessibility that the material had, stating:

"The pieces can only be where the Law marks
heritage they have to be, which is at the Bibat, at the Museum
Archaeological, they are deposited, they are in the archives that we have there, There's
a special protocol for those who go to visit them, you have to give the name and
All there are the pieces physically are all there." p. 48 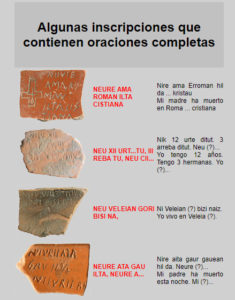 leia was a Roman city and now an archaeological site located 10 km west of Vitoria-Gasteiz, owned publicly owned in the name of the Provincial Council of Alava, where excavations have been carried out since the nineteenth century.

In 2005 and 2006 the company Lurmen S.L., then in charge of the management of the site and directed by Eliseo Gil, discovered a few hundred pieces from Roman times with the so-called "graphites of an exceptional character": inscriptions with figures of daily life, of Christian theme, of mythological characters, with hieroglyphics, with texts in Latin, in Greek and in Basque; A TREASURE OF HUMANITY.

Some of the inscriptions in Basque (appearing in strata that archaeologists place in the 3rd century), contain complete prayers, which makes this find a cultural treasure of great importance for the historical study of Basque, ahead of seven centuries Glosas Emilianenses. On 08-06-2006 Eliseo Gil, Joaquín Gorrochategui and Henrike Kn'rr (the last two, philologists of the University of the Basque Country) publicly presented the exceptional discovery.

This extraordinary find, however, ended up being false by the Provincial Council of Alava and the University of the Basque Country, who tried to try to do not and make forget the discovery. On 19-11-2008, the Provincial Council expelled the archaeological team of Lurmen S.L. and presented a complaint against Eliseo Gil on 24-03-2009. He has therefore been publicly criminalized for more than ten years as if he were a forger, without anyone having presented a single reliable piece of evidence, but only theories and opinions.